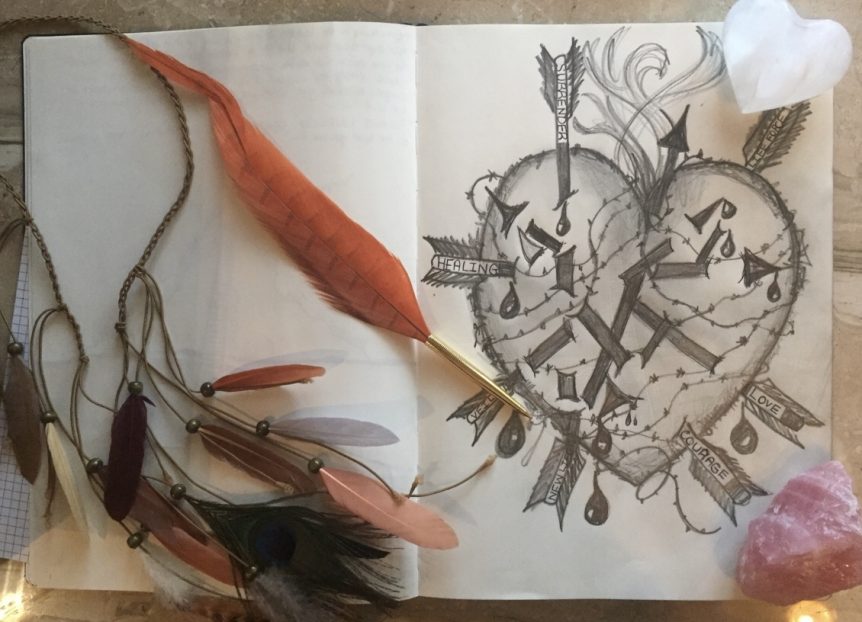 HOW TO SILENCE A WOMAN: RETREIVING HER VOICE…

–When someone says, “We’re saying the same thing.”

Say, “We are not saying the same thing.”

–When someone says, “Don’t question, just have faith.”

Say, “I am questioning, vato, and

I have supreme faith in what I think.”

–When someone says, “Don’t defy my authority.”

Say, “There is a higher authority that I follow.”

–When someone says, “Your ideas are seductive.”

Say, “No, my ideas are not seductive,

–When someone says, “Your ideas are dangerous.”

Say, “Yes, my ideas are dangerous, and
why are you so afraid hombre o mujer? ”

Say, “All life begins small and

must be allowed to grow.”

Say, “It is well thought out.”

–When they say, “You’re over-reacting.”

–When they say, “You’re being emotional.”

Say, “Of course I have well placed emotions,

and by the way, what happened to yours?”

–When they say, “You’re not making any sense.”

–When they say, “I can’t understand you when you’re crying.”

Say, “Make no mistake, I can weep and be fierce

at the same time.”

–When they say, “I cant understand you when you’re being so angry.”

Say. “You couldn’t hear me when I was being nice,

or sweet or silent, either.”

–When someone says, “You’re missing the point.”

Say, “I’m not missing the point, but you seem

to be missing my point — What are you so afraid of?”

–When someone says, “You are breaking the rules.”

–When someone says, “That’s not practical.”

Say, “It’s practically a done deal, thank you very much.”

Say, “I know you have a hard time listening to that.”

–When it is said, “It’s a closed system,

you cant change it.”

and if there is no answer,

then I am going to blow the doors off that system

and it will change.”

Say, “They won’t ignore me and the hundreds of thousands who stand with me.”

–When they say, “It’s already been done.”

–When they say, “It’s not the right day,

Tell them, “The right year was last year,

and the right month was last month,

and the right day was yesterday,

and you’re running behind schedule, vato,

are you going to do about it?”

tell them who you are,

and don’t hold back.

you’ll have to put up with it too.”

–When they say, “I’ve suffered a long time

and you’ll have to suffer too.”

–When they say, “You’re an incorrigible, defiant,

hard to get along with,

and I have worse news for you yet —

we are teaching our daughters,

we are teaching our sons,

G
“How To Silence A Woman, Retrieving Her Voice,” ©1980, 2008, 2018C.P. Estés, All Rights Reserved. {Parts of the preamble are from an article at ncr.online.} For permissions: projectscreener@aol.com…

This blessing, is a chant, a lyric form from my ethnic tradition. It is made to be spoken aloud, so not just meanings, but its heartbeat, can be discerned; enjoined. Colloquially, in the family, we’d call it a song rather than a poem, in this case, a “song for straight vision and strength.” The word vato, is a slang Spanish word, for a person who might know the streets, and also an informal way of addressing a man, such as in the street … e.g., “Man, don’t you realize?”

Over time, this prayer-poem “How To Silence A Woman, Retrieving Her Voice” has been put forth at the United Nations, and presented during a tribal women’s coalition in South Africa, as well as carried into session at the parliament in the Netherlands, and given before U.S. Congressional hearings on welfare reform in the 1990s.

Dr. Clarissa Pinkola Estés is Mestiza Latina [Native American/ Mexica Spanish], presently in her seventies. She grew up in the now vanished oral tradition of her war-torn immigrant, refugee families who could not read nor write, or did so haltingly, and for whom English was their third language overlying their ancient natal languages.

She is a lifelong activist in service of the voiceless; as a post-trauma recovery specialist and psychoanalyst of 49 years clinical practice and missions with persons traumatized by war, including exiliados and torture victims; and as a journalist covering stories of human suffering and hope.

As a post-trauma recovery specialist, she served students, teachers, and familles at Columbine High School and community for three years after the massacre.